Whether he’s ripping throats and crushing skulls as a seven degree black belt Aikido master in his brilliant, award-winning* movies, or setting the neck of his Stratocaster on fire as a gun-for-hire blues musician – his ever receding ponytail and ever encroaching gut have never stopped being worthy of having his image preserved in gold and constantly worshiped by a swarm of feeble peasants. 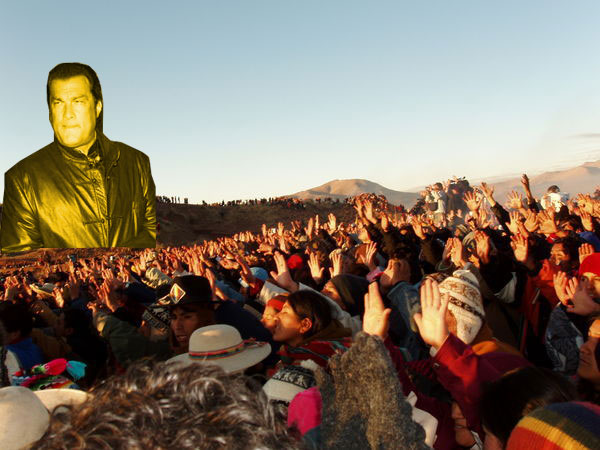 As the great one’s own website attests, Seagal is “an accomplished actor, musician, martial artist, and philanthropist,” who just happens to have crushed it in cinema masterpieces, such as Above The Law, Under Seige, and Under Seige 2: Dark Territory, and that’s all without ever raising his voice above a gravelly whisper while he snaps punks ankles from his knees:

But as full of testicles as this Jedi kung fu lord might seem, there is but one confusing aspect to his arsenal that doesn’t quite click with overall aura of badass muthafuckerness… and that’s that his running action is, for lack of a better reference point, like that of a nine-year-old girl.

Now, I’m not one to make sweeping assumptions about combat based on gender. I have little-to-no doubt Ronda Rousey could pull my arsehole through my earhole if she decided that’s what she wanted to do at that second, but you gotta admit, he looks like he’s in the middle of a spirited game of ‘Kiss Chasey’ and not trying to stop commies from overtaking a nuclear sub.

Either way I’m praying that he never reads this article for fear that he’ll turn up to my house one morning in a gi, rip my arms off and then feed me my cereal using my lifeless fingers, as I slowly bleed out like a broken lawn sprinkler.

*I’m not sure exactly what awards his movies have won, but I’m assuming all of them.