Mark Kozelek is a total arsehole. Or at least that’s the persona he adopts on stage and in the media of late.

Prime example – the Sydney leg of his recent Sun Kil Moon Australian tour (which I attended) featured him abusing the production crew, taunting the audience, openly hitting on women mid performance, and barely playing guitar while touring off the back of a spectacular guitar album, 2014’s Benji.

Before that he’d been the well documented protagonist in a series uncomplimentary public run-ins over the last 12 months, having confrontations with the likes of The War On Drugs, Perfect Pussy’s Meredith Graves, and the entire audience of the 2014 North Carolina Hopscotch Festival, an incident which he immortalised at his own merch desk with this special edition T-shirt: 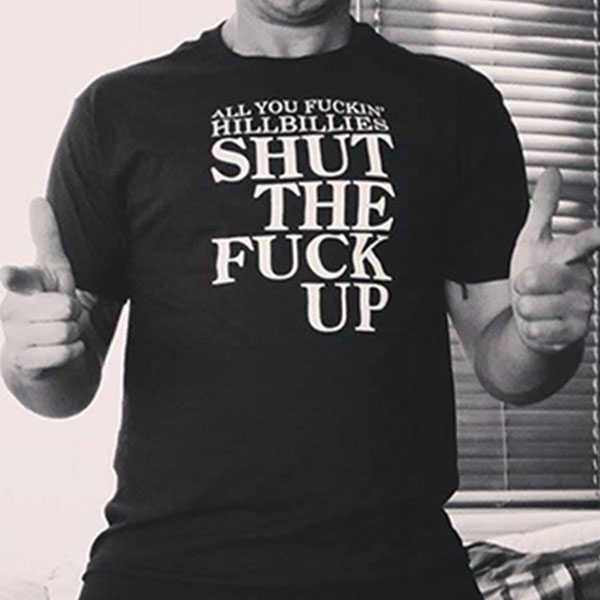 But for all his flaws and large amounts of douchery, there are two reasons that will forever make me see Mark Kozelek as less of a middle-aged curmudgeon and more of a gentle, miss-understood soul.

The first is that he was the member of Stillwater that started the ‘Tiny Dancer’ singalong in Almost Famous:

And the second is the song he wrote in tribute to his cat, ‘Wop-a-Din-Din.’

For any pet owner (but particularly if you’re single) the anguish of leaving your animal alone, even if it’s just to go to work for the day, can be incredibly difficult to deal with. Especially if you’re me and knowing that leaving the house for the day will involve your dog chewing the shit out of the fence around your verandah.

When I go away for weekends for work however, the guilt associated with abandoning my animal can feel unbearable at times. So for a touring musician like Kozelek, who could be away from his cat for months at a time, the separation must have been incredibly difficult.

In ‘Wop-a-Din-Din’ he manages to capture that guilt and unease associated with being an absent pet owner, as well as the guilt and unease he experiences knowing that although his pet could be happier with someone who could be there all the time, he could never give her up because of his own, selfish love.

His lyrics also beautifully illustrate the unspoken bond between a pet owner and a pet and the truly special moments you spend with an animal, communicating non-verbally but expressing love for each other in the best way your different species know how.

‘Wop-a-Din-Din’ first appeared on Kozelek’s final album with Red House Painters, 2001’s Old Ramon, but the below version is taken from his White Christmas Live solo album (and for unknown reasons has been animated with this weird puppet video). In it you can hear the intimacy between his voice, the strum of his strings, and the deep love he had for his cat and the result is totally hypnotising.

Mark Kozelek might be a total arsehole, but every time I hear this song I call my dog to my lap, give her a hug, and am thankful for the time we share together.

White Christmas Live is difficult to find these days but you can buy copies from Discogs.