I feel confident that in time many will come around to the realisation that Jeff Rosenstock’s indie punk party opus Worry. is one of the best and most-underrated albums of 2016.

Although it stands easily as the most accessible, realised and infectious release to date from the AV Club‘s alt-punk hero, it’s somehow missed the recognition it deserves with most critics as they pull together their ridiculously skewered and immeasurably frustrating end of year lists.

That being said, I have little doubt that the power and beauty of songs like the bar room anthem ‘We Begged To Explode,’ the Jay Reatard worthy ‘Bang On The Door,’ or a song so hazy with Weezer nostalgia that it might as well be wearing Rivers Cuomo’s bifocals in ‘Staring Through The Window Of Your Old Apartment’ – that it will one day find a passionate audience beyond his already loyal following that will shout its praises from worn out turntable speakers around the world. Seriously, it’s a brilliant, brilliant album.

Another record, however, that has somehow managed to escape through the year in criticism and fan attention is the staggeringly amazing album Impossible Animals by Phoenix psych-pop outfit, ROAR – and that, in my opinion, is a criminal oversight.

The aforementioned Jeff Rosenstock and ROAR mega-fan humbly agrees, having shared the album in a post on Facebook a couple of weeks back as part of a genuinely charming list of records that have had an affect on him this year that he’s been sharing with fans.

“2016 brought Roar’s first full-length record, Impossible Animals. There’s not a lot of bands I push harder on my friends than Roar – I simply can’t believe this music has flown under the radar for this long. Beautiful, sad, poppy, uplifting and unique. Ronnie Spector, android voices, pet sounds, home recordings. There’s parts of this record I’m still finding and I’ve been listening to it for half the fucking year.” – Jeff Rosenstock, Facebook – Dec 8.

Deep in a Worry. hole / under the influence of Jeff at the time, and having completely missed the record myself when it was released back in April – reading this succinct one-par review was more than enough to get me to chase down a Spotify link. I clicked on the album’s most popular track ‘Hope’… and was flooded with the last 60 years of recorded pop music diluted into the single song. I was floored. Rosenstock’s earnest praise barely scratched the surface of just how good this music is.

A heavenly strummed harp intro, rolled into a bomp… bomp-bomp-crash beat and jingle bells fit for the Ronnettes at their most glamorous, before diverting into a vocoder hummed opening line that then made way for the Beach Boys singing through a cavernous hall of reverb, it pulled back the throttle into an Elliott Smith-esque mini bridge, before downloading into Grandaddy’s The Sophtware Slump‘s arpeggiating synths and falsetto vocals, finally exploding into a single chorus burst that would be an instant classic on anything from the Elephant Six collective… And that was just the first 1:51min of the song’s full 3:36min. I could go on, but I feel it would be redundant.

Even the lyrics for ‘Hope’ are heart-crushingly beautiful on paper alone: 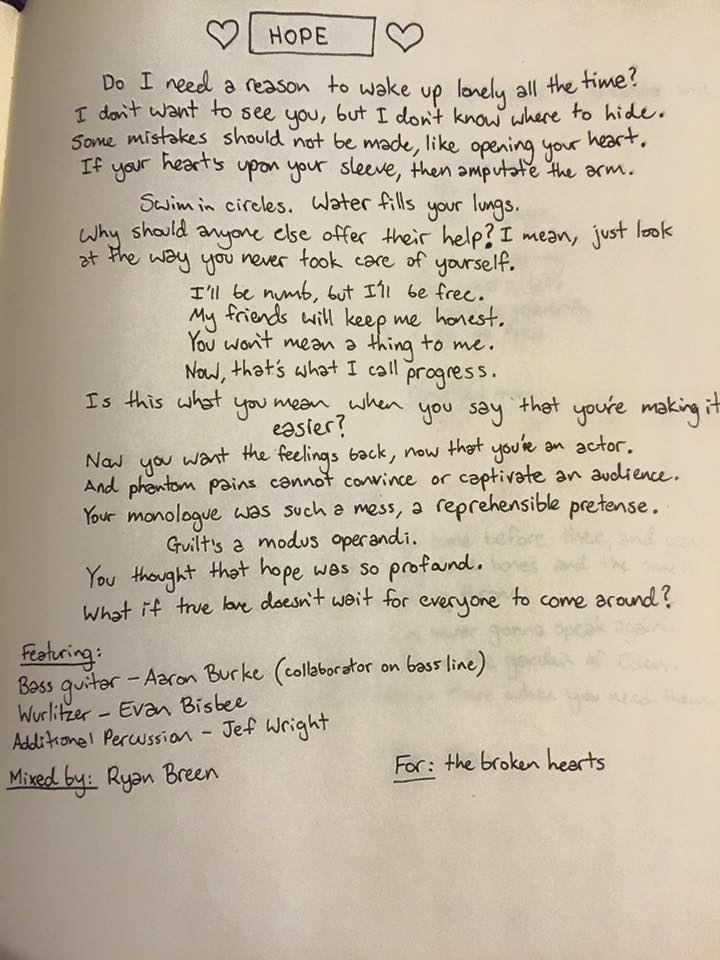 The song is no fluke either. across the record’s entire 10 tracks lay a mystical maze of styles, textures and arrangements that produced one of the most thrilling sonic rides I’d heard all year. The hypnotisingly sunny ‘Explosion Of Birds’ (that stands as the endearing inspiration for the album’s embroidered cover art), through to the OK Computer-esque ‘Theophobia,’ the zooming waltz of ‘Truck Stop Tiger’, and the heart-melting closer ‘The Ocean’ – it became painfully obvious that ROAR, and its mastermind Owen Evans, had somehow flown through the year like a stealth bomber and completely avoided all radar detection.

Evans, it seems, has spent most of his career in the shadow of his counterparts (he’s an occasional member of AJJ – hence his connection to Rosenstock) and ROAR only features a miserly 2,400 FB likes. The record has only been reviewed one and a half times online that I can find, and other than being included in a list of ‘10 Arizona Bands You Should Listen to Now‘ put out by Paste four years ago, their praises have all but been unsung. How it’s missed the ears of the AV Clubs, the Stereogums, the Bob Boilen’s etc – well, you get it. This whole article has been written in semi-disbelief / outrage because it makes zero sense to me that this album wasn’t massive.

So, I implore you these holidays to take the time to listen to and embrace Impossible Animals – the jingle bells in ‘Hope’ are enough to make it feel like a holiday record anyway – and if it seizes you like it gripped me, please go and shout your own praises for it online and to everyone you can.

It really does deserve a roar rather than the whimper it’s received.